New Lab City
How might we frame a smart city challenge that bridges startups, citizens and the officials?

New Lab City is an initiative by New Lab which aims to create impact and value via data capturing and an urban installation, using the area of Downtown Brooklyn, NY, as a test-bed for this first edition. During the past four months, we went from problem identification to scenarios for piloting. From the most pressing urban issues, we chose trash as the challenge, designing a system around real-time trash tracking connected to a data brokering platform that together bring value to entrepreneurs, city stakeholders and citizens.

ATÖLYE’s main mission in the New Lab City Project was to identify what kind of values can be generated by real-time data capturing, and understand the challenges faced by smart city projects, as well as develop a framework for the process in all editions to come. We studied 189 articles, papers and study cases, mapped 99 startups and organizations, and 65 projects working on the field of smart cities. We also interviewed 35 professionals including experts on smart city projects, city stakeholders and startups’ top management executives. This whole process led us to understand that the project should not be about Smart Cities technologies, but the creation of Resilient Cities.

The research efforts were conducted on both local and global scales. Globally, we needed to understand where cities are going, what are the most relevant case studies on smart technologies and what we could learn from them, to identify what should be done and should be avoided. In order to outline the challenges that the New Lab City: Brooklyn could tackle, we conducted stakeholder interviews, online research on current private and public initiatives and performed field observations. These two approaches helped us to frame a global best practices framework, as well as uncover Brooklyn’s local challenges to be tackled. 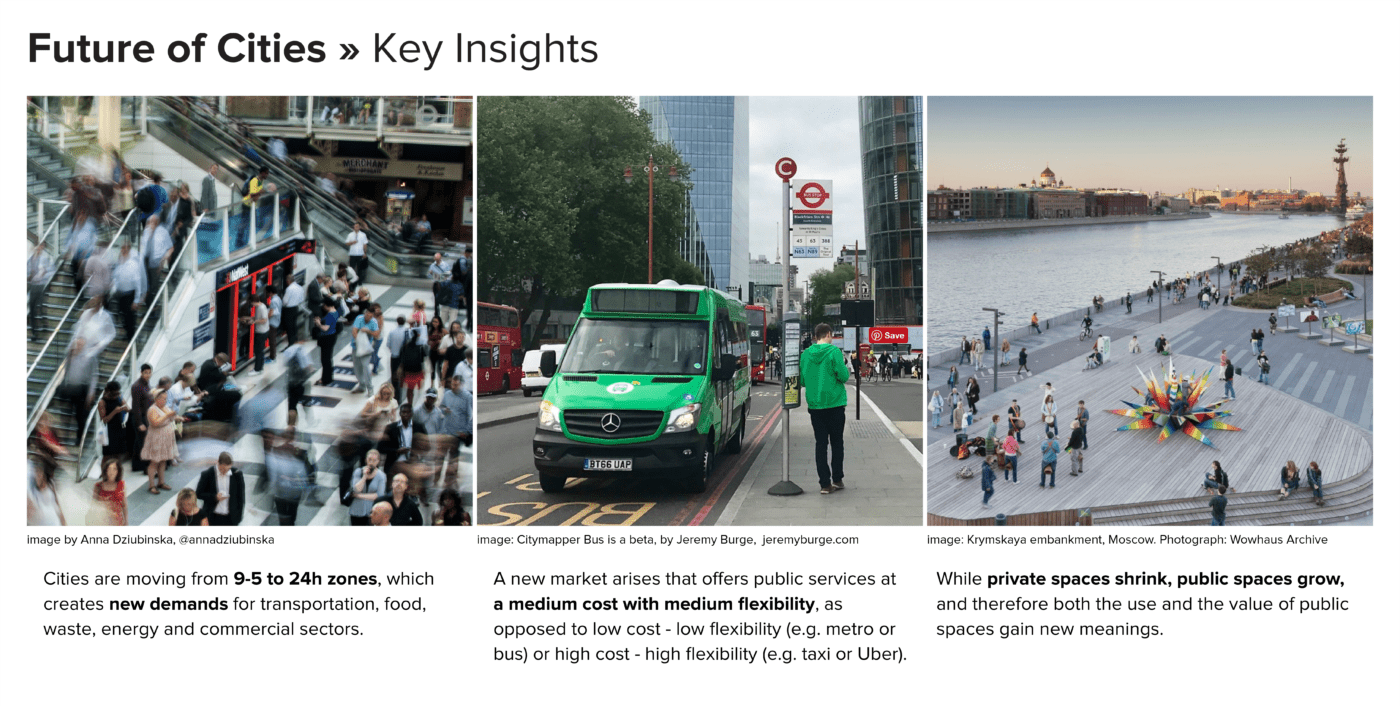 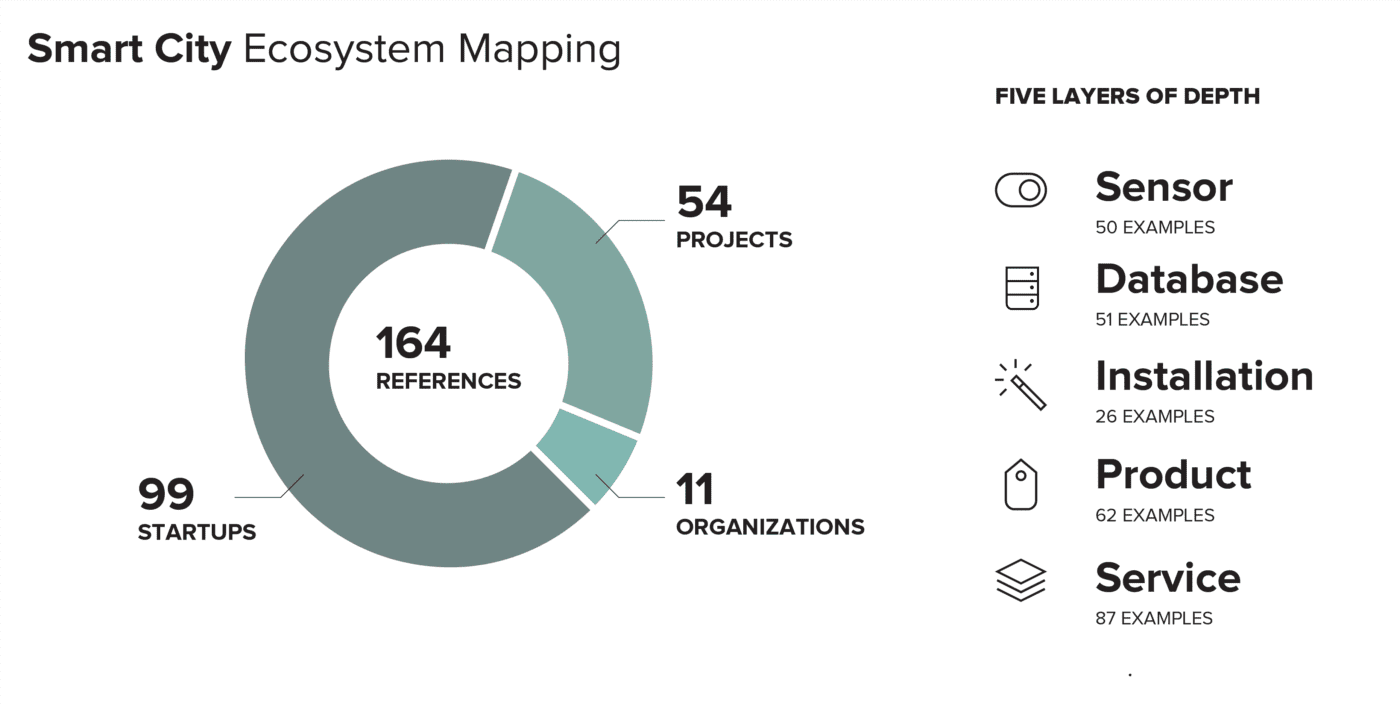 A total of 164 references for Smart City Startups, Organizations and Projects were mapped, showing that startups lead the efforts in this new field, followed by temporary projects and initiatives by the public or private sectors. We could, then, classify the references in five layers of depth.

A significant amount of the references remains in the sensor level, just collecting data. Others work on building databases for data insights. Data can used in artistic urban installations, or commercial products. But most impactful are the ones connecting real-time data to city services. 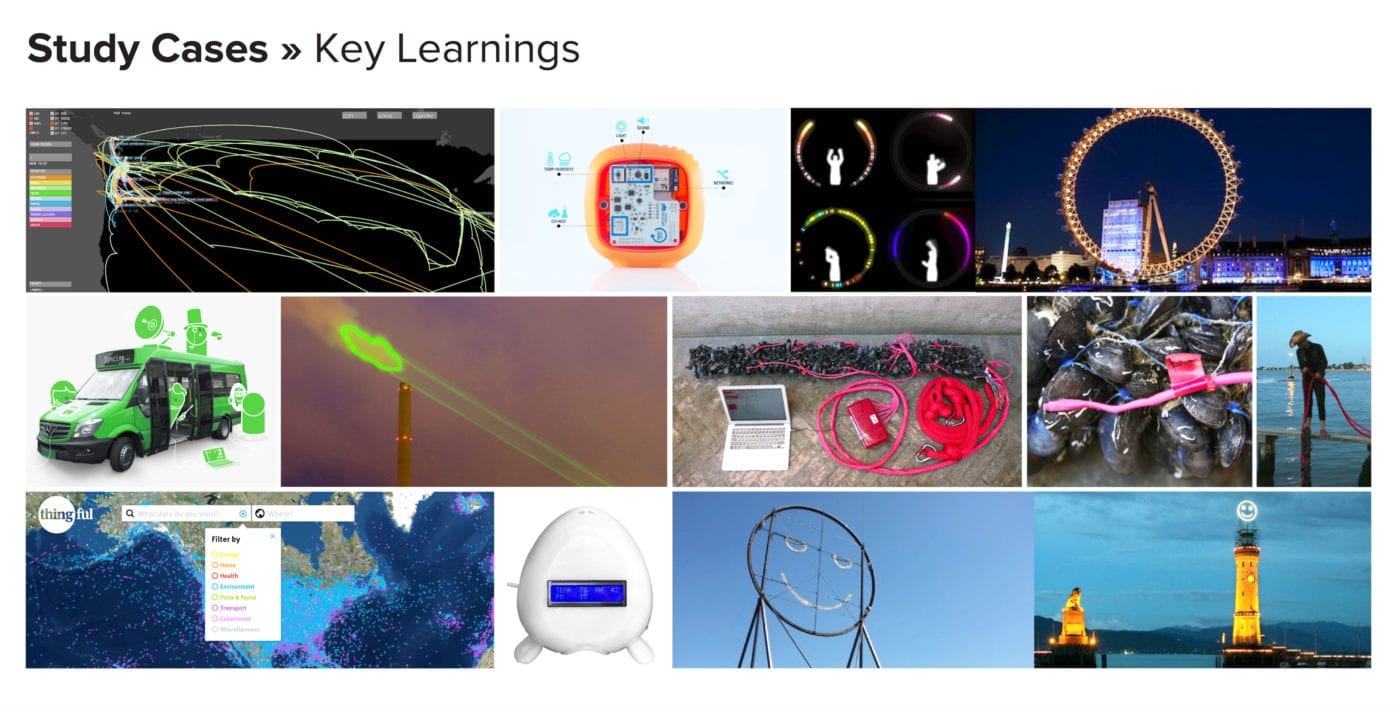 Ten startups and nine projects were chosen to be studied in detail. These study cases brought our attention to the importance of piloting in the urban context, the bad replications of using public data for profit, and the importance of defining the purpose and value of the data collection.

Interesting references show real-time data directly triggers services, the use of natural/biological sensors, cameras to track the mood of people, and smart use of existing urban infrastructures. A total of 353 references were compiled in a dedicated Graph Commons interactive database. 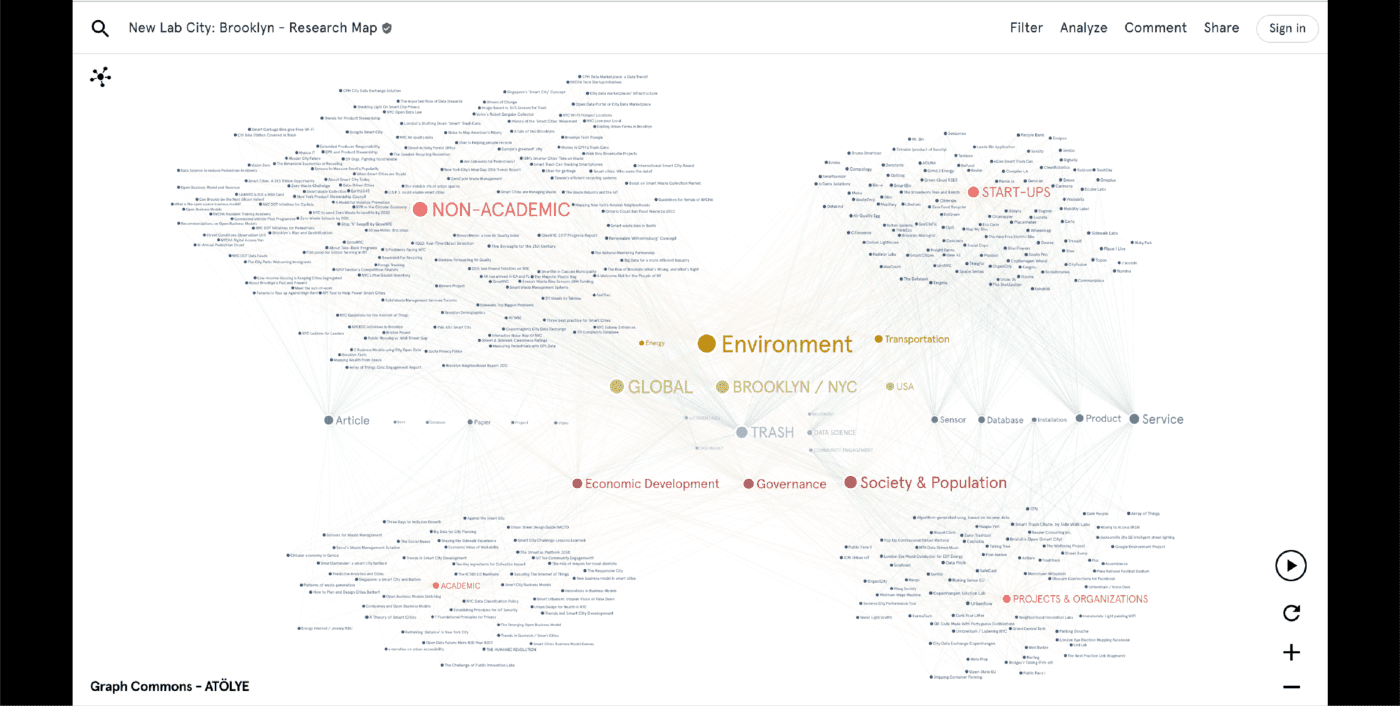 To further understand what challenges Smart City projects face, we interviewed nine experts from both business and academia sectors, that provided valuable information on how to best conduct the project, what should we aim for, and what fallbacks to avoid. They also contributed greatly with rich references of theory to study as well as insightful Smart City initiatives. To identify the issues faced by city stakeholders in developing the city and better serving its citizens, we talked to ten professionals from the NYC Mayor’s Office, NYCEDC, Downtown Brooklyn Partnership and the Brooklyn Navy Yard administration. 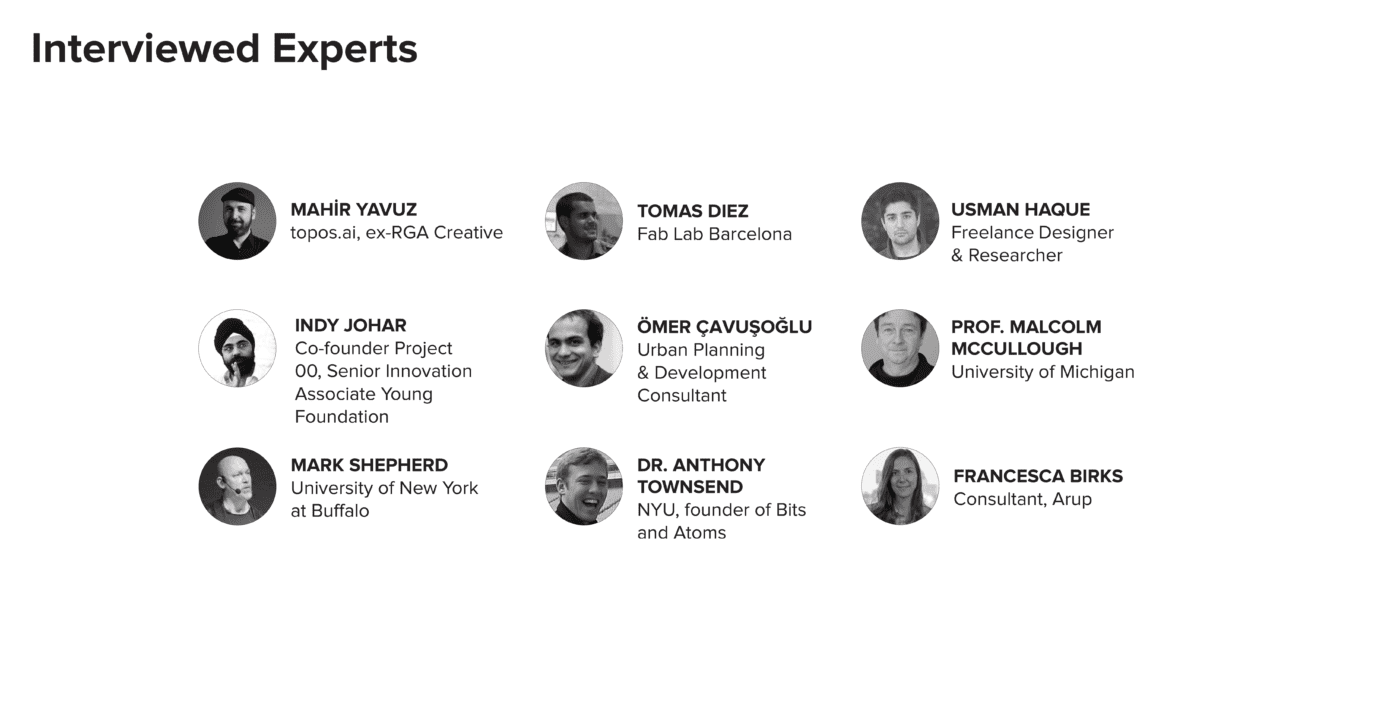 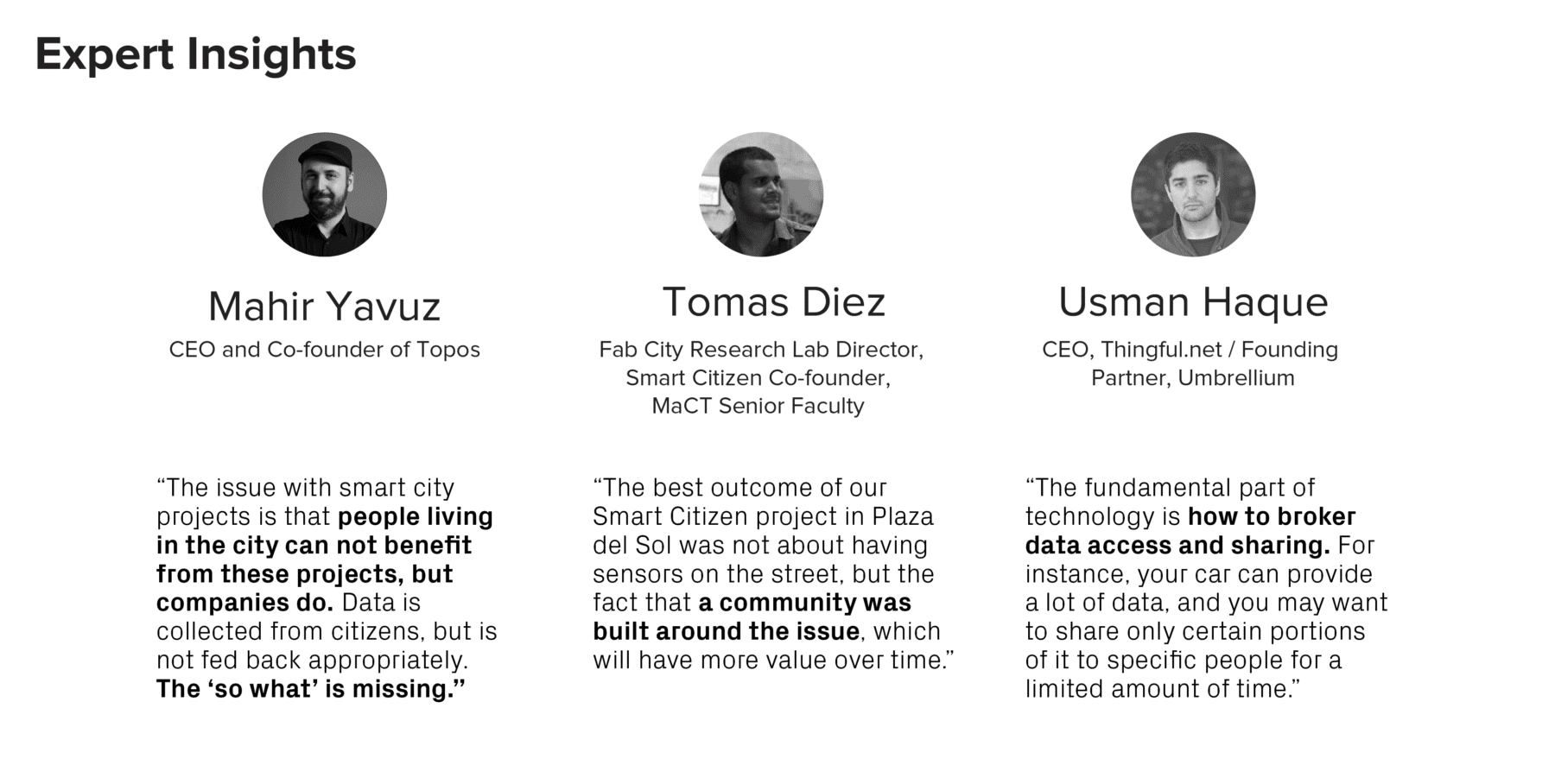 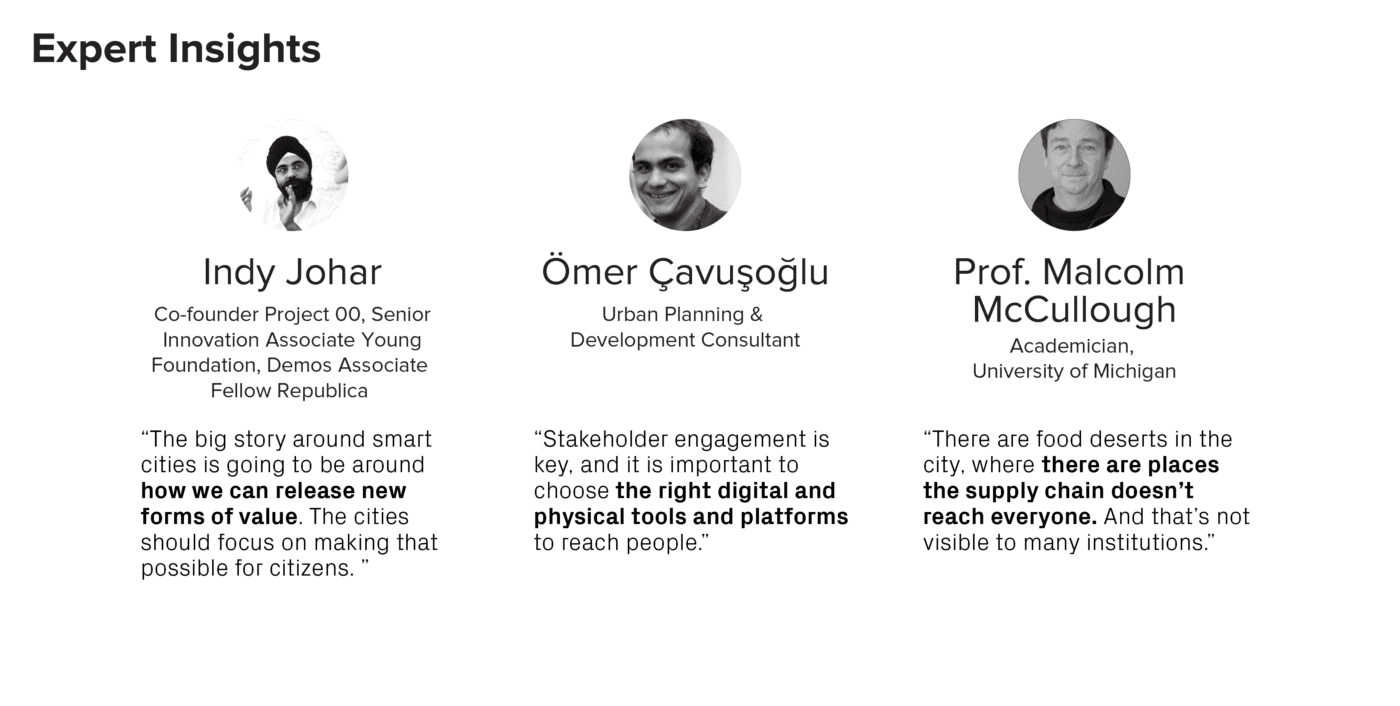 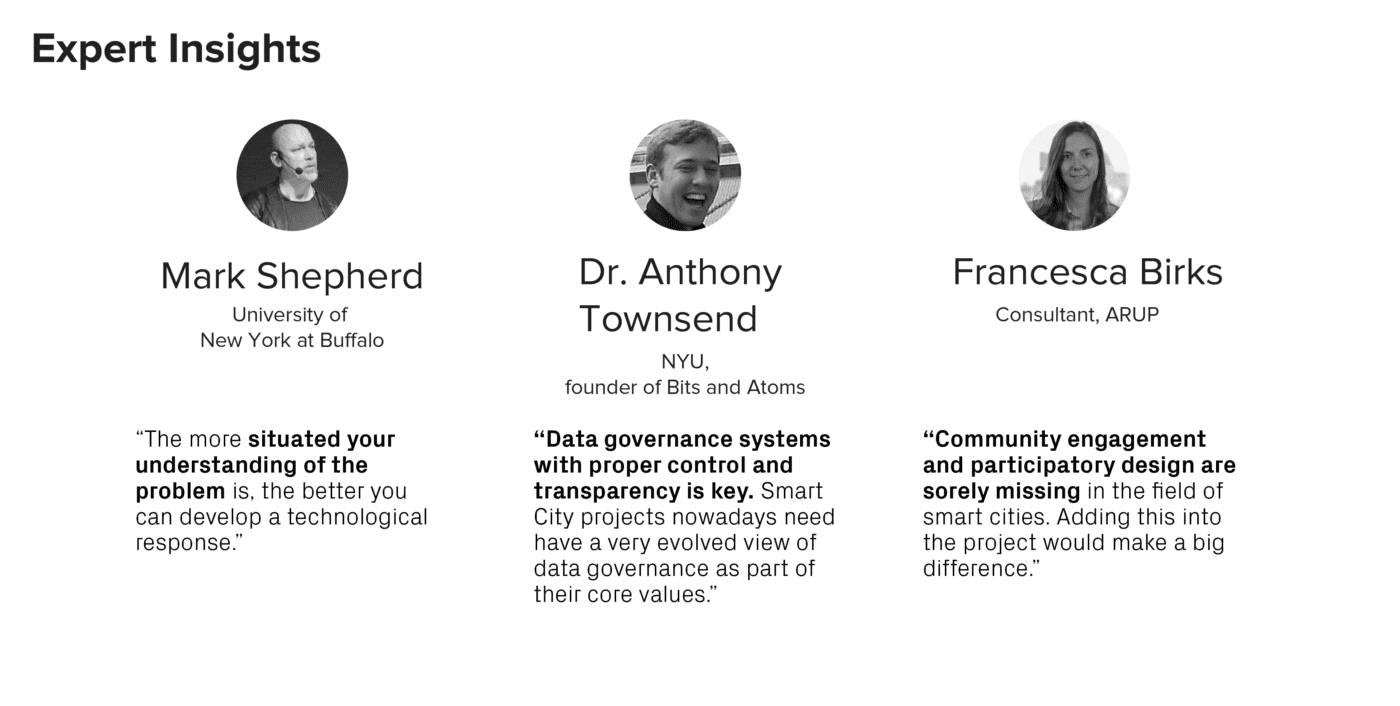 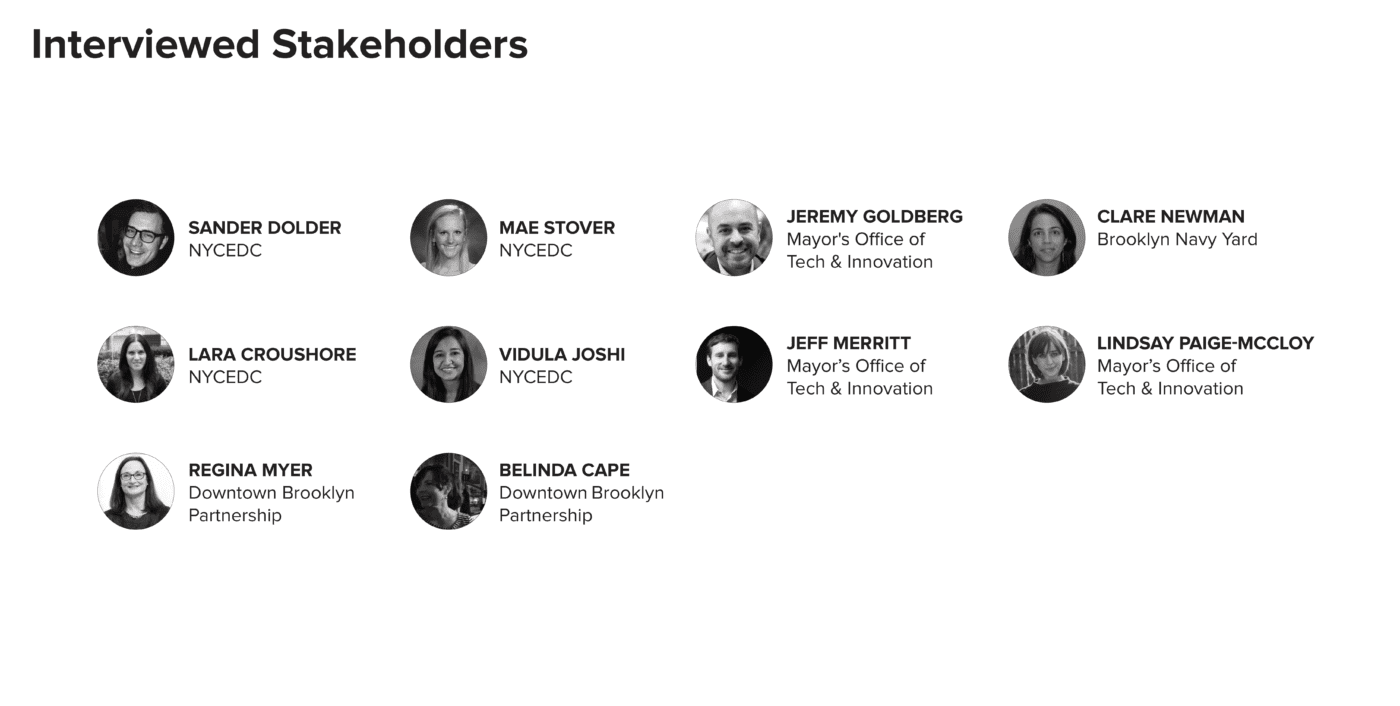 From all the research done, we designed seven principles for New Lab City, that address different aspects of a Smart City Project such as how to engage players, how to create value, how to use data as an asset, and what derivatives could result from it. The principles work in a closed loop, which together bring opportunities for new forms of value, and contribute for a Resilient City. 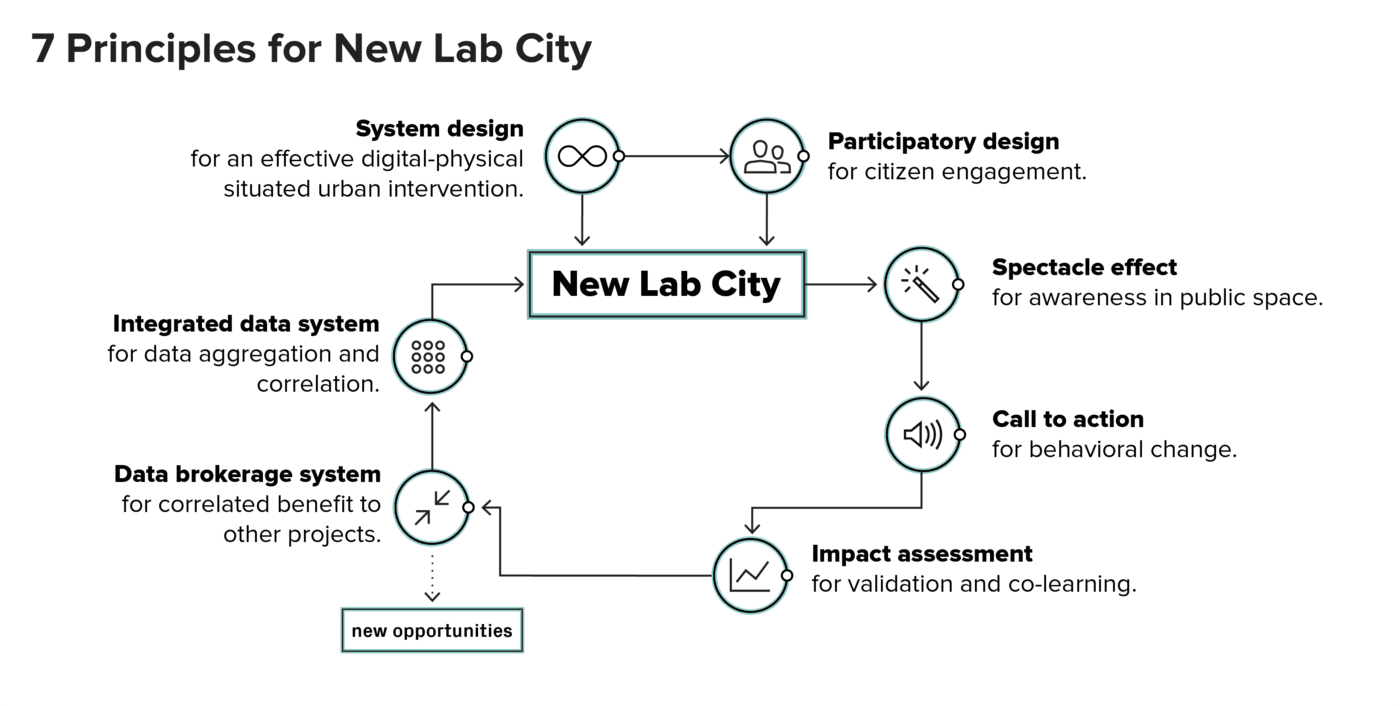 From Principles to System Design

New Lab has close relations both with entrepreneurs and public stakeholders, and therefore, is in a unique position to connect them, creating win-win opportunities via the sensor box and the dashboard. Thus, we created a system design which gives two roles to New Lab.

New Lab City as connector: Startups need to pilot their projects to be tested in the city environment, and public stakeholders need to be able to prove the impact their investments will generate when contracting a new city client. Through participatory design process, New Lab can make it possible.

New Lab City as technology provider: The sensor box and the startup pilots will be deployed in the same area. Sensors will capture data both relevant to startups and to the urban challenge at hand. The dashboard will serve as a data exchange platform, receiving and redistributing the data. 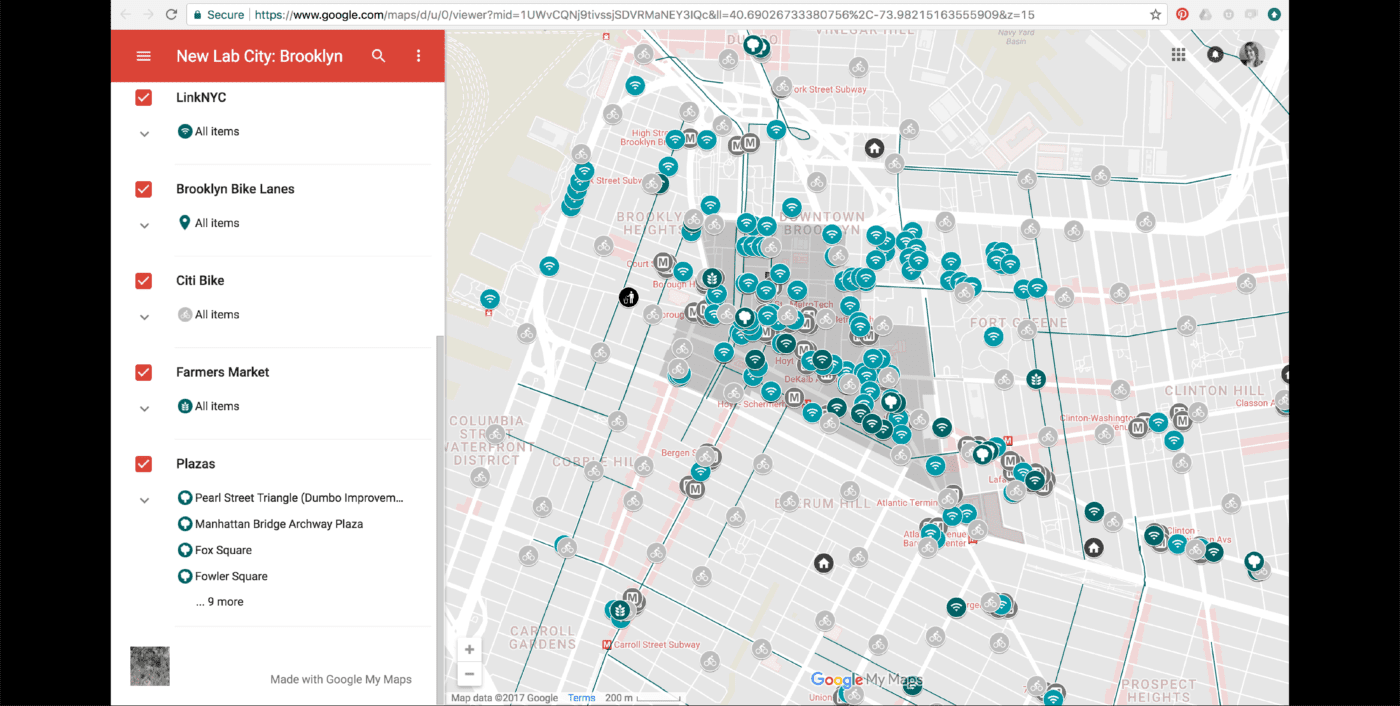 Downtown Brooklyn was defined as the test-bed area, so our first insight was to see the territory from the data perspective. We merged a wide range of data sets already available about Downtown Brooklyn in the same map, including transportation, internet, food, parks and plazas.

Considering Brooklyn’s top issues and characteristic, the following hypotheses were generated: mapping noise for vibrancy or chaos of an area; mapping air quality in different heights; mapping pedestrian activity for various purposes; and mapping littering and illegal dumping on the streets. 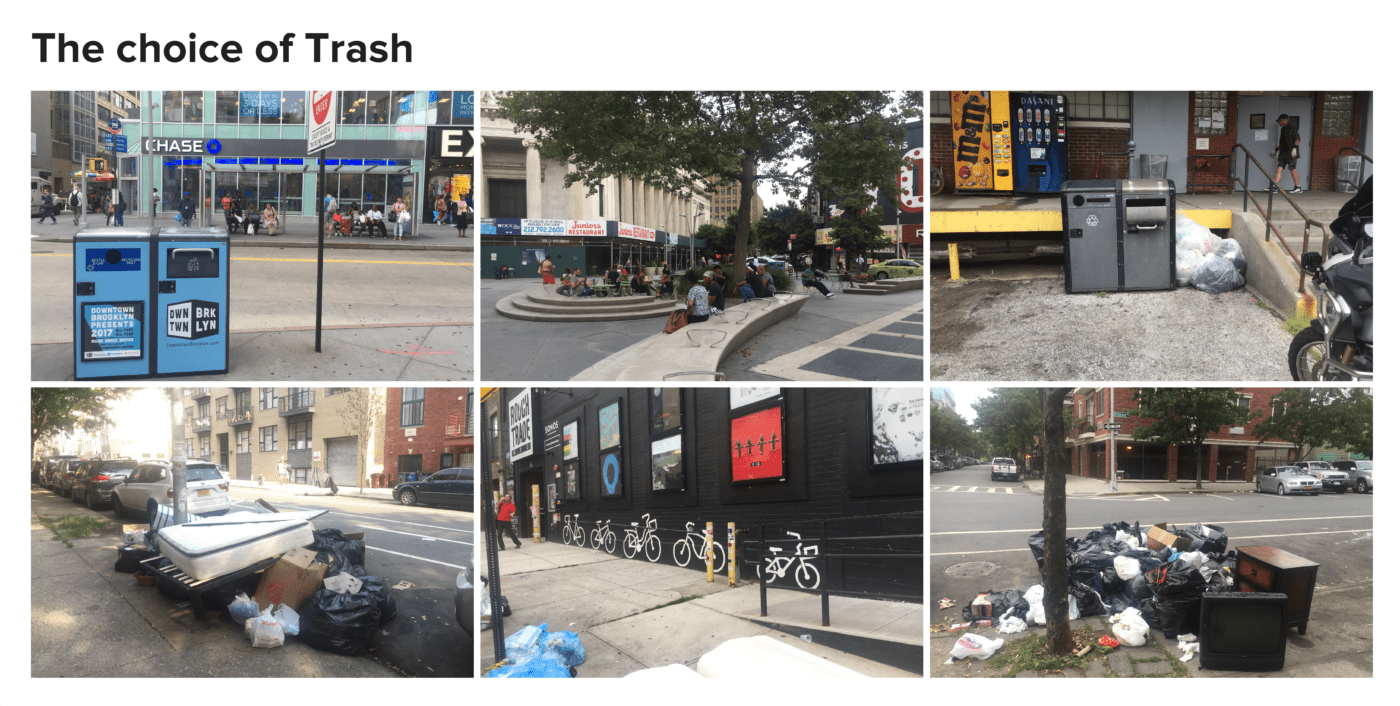 From field observations and interviews, the issue of trash in the streets of Brooklyn became more and more a priority. Streets suffer mostly from illegal dumping from residents and commerce, as well as littering. Residents dispose of things they no longer wish, and commercial spaces avoid paying the fee they are supposed to in order to have their refuse properly collected. Therefore, we set to do further research on the topic and uncovered the following insights:

» Trash is an endemic problem, with impact beyond well-being and environment, including traffic due to trash haulers, real estate value, plumbing issues, rodents and more.

» It has the most opportunity for citizen science, participatory design and behavioral change, via new offers of systems and services.

» In 2014, Brooklyn had grown 11x more as a residential area than expected since 2004, and without prior plans for dealing with the increasing waste production.

» One of the top priorities of the OneNYC plan is the ZeroWaste, which aims to eradicate the trash sent to landfills by 2030, via increased recycling and composting. 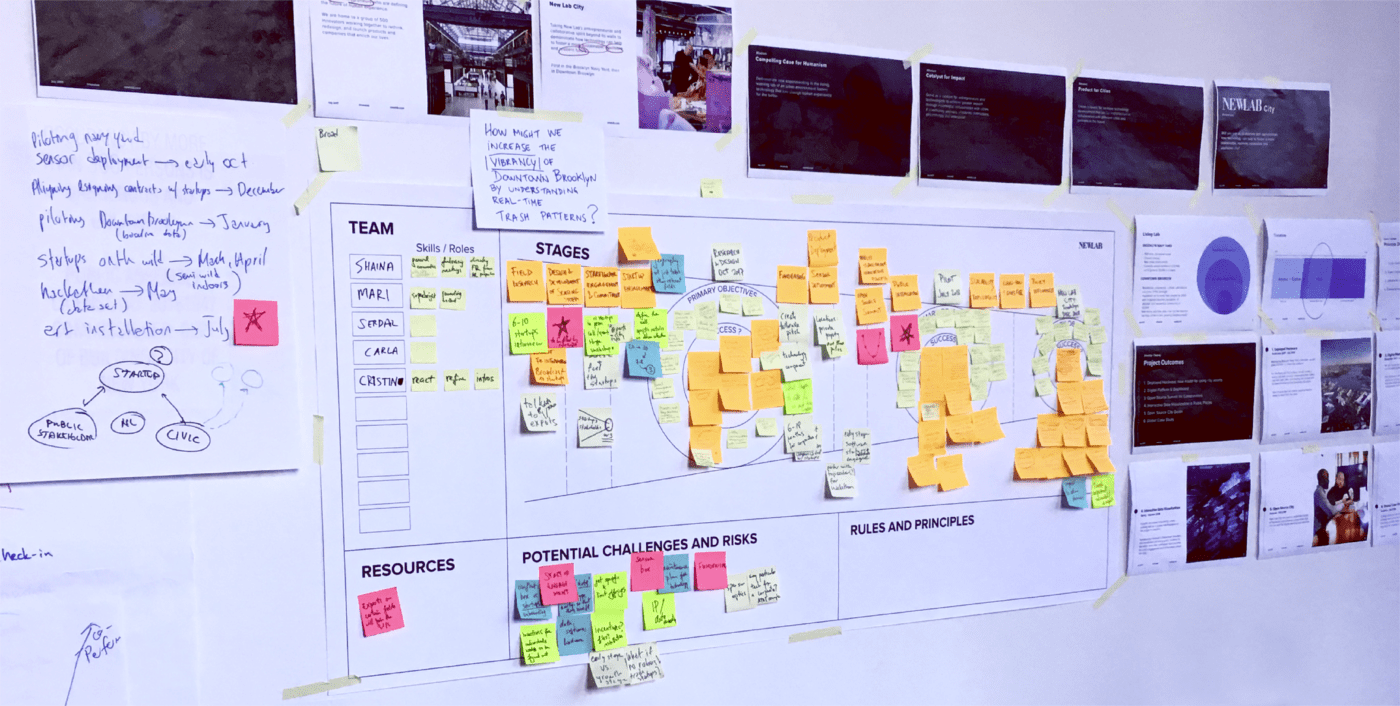 We then conducted an internal workshop using the Gameplan Canvas as a tool to define what success meant to the project in each phase of development. We decided than that the first step should be to outline the startups working in the topic of trash, understanding what value they bring and who do they target. In parallel, we also began to interview startups working on the fields of trash, movement, and data science, to understand how they could participate in the system, what would they be most interested in, and on which criteria should they be selected. 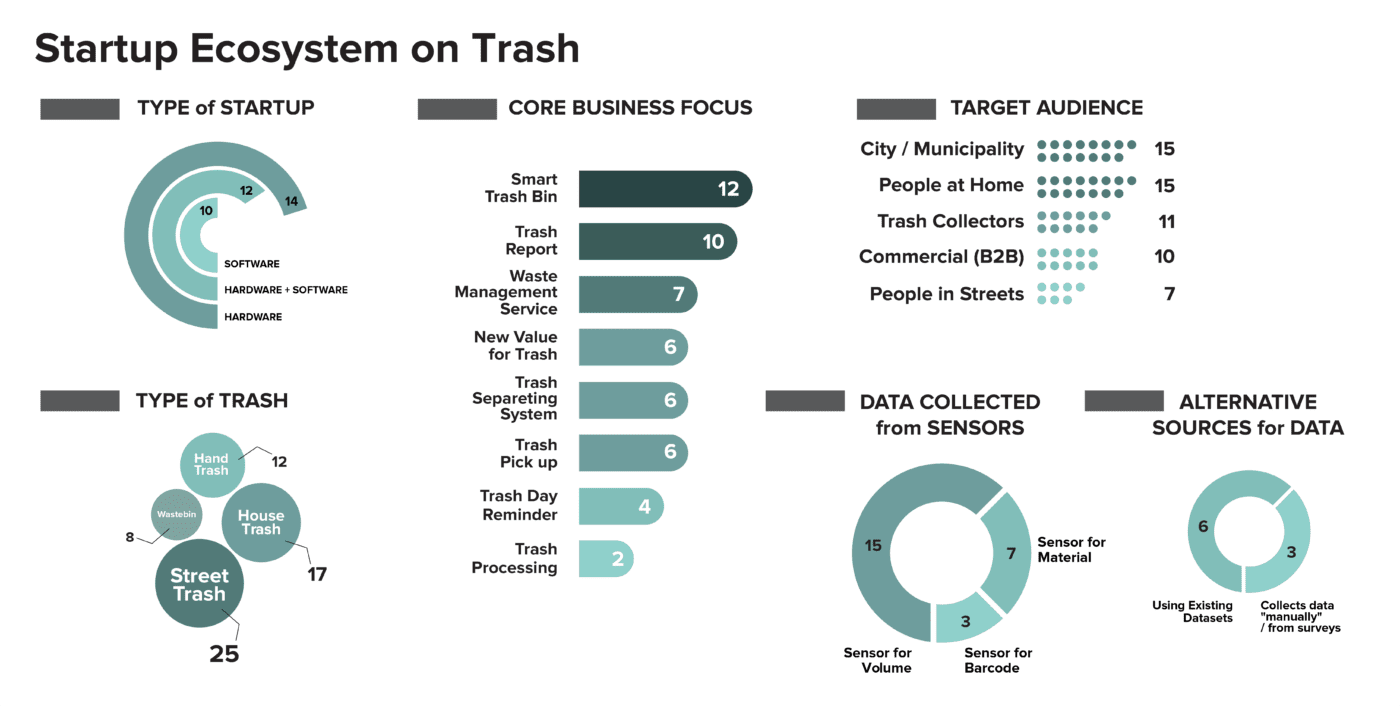 As we mapped the Startup Ecosystem currently working on trash, we discovered that no startups are actively working on tracking litter or illegal dumping on sidewalks – key issues for the city where no consistent data is being produced. At the same time, hardware startups have very little or no information on the context or usage of their products. Therefore, a clear opportunity of using New Lab City’s sensor box to track trash patterns in sidewalks, while also sharing insights to hardware startups was identified. And as software startups plug into the system, they can take advantage of all data sets produced and deliver meaningful data insights to all parties involved. 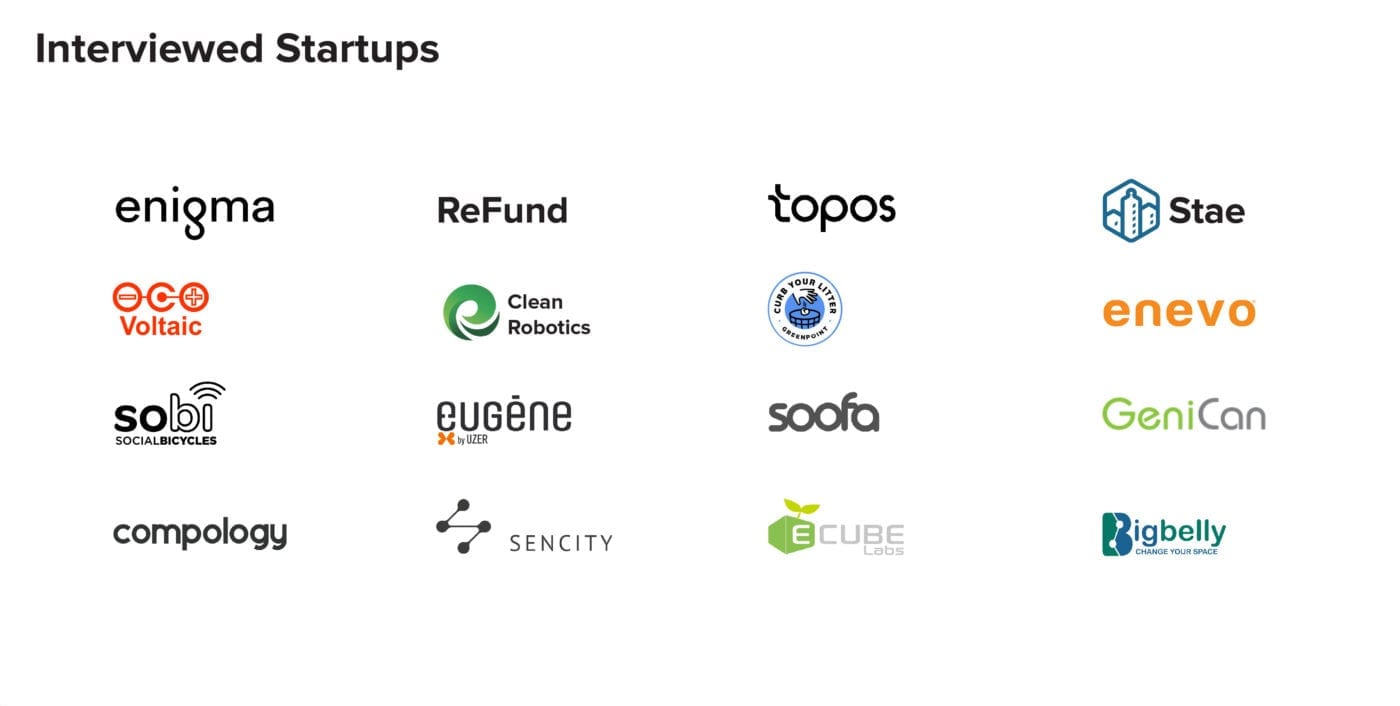 We talked with 16 companies, ranging from early stage to later stages, and they were interested in four main things: 1. Access to the city as client; 2. Testing their products in the city; 3. Getting contextual data to improve their products; 4.Having a case study or PR visibility for promoting themselves.

Furthermore, we identified the main criteria that startups must comply to be selected: have bandwidth to dedicate time and resources in the program, be interested in participatory design, be willing to share relevant streams of their data, and have a Minimum Viable Product. 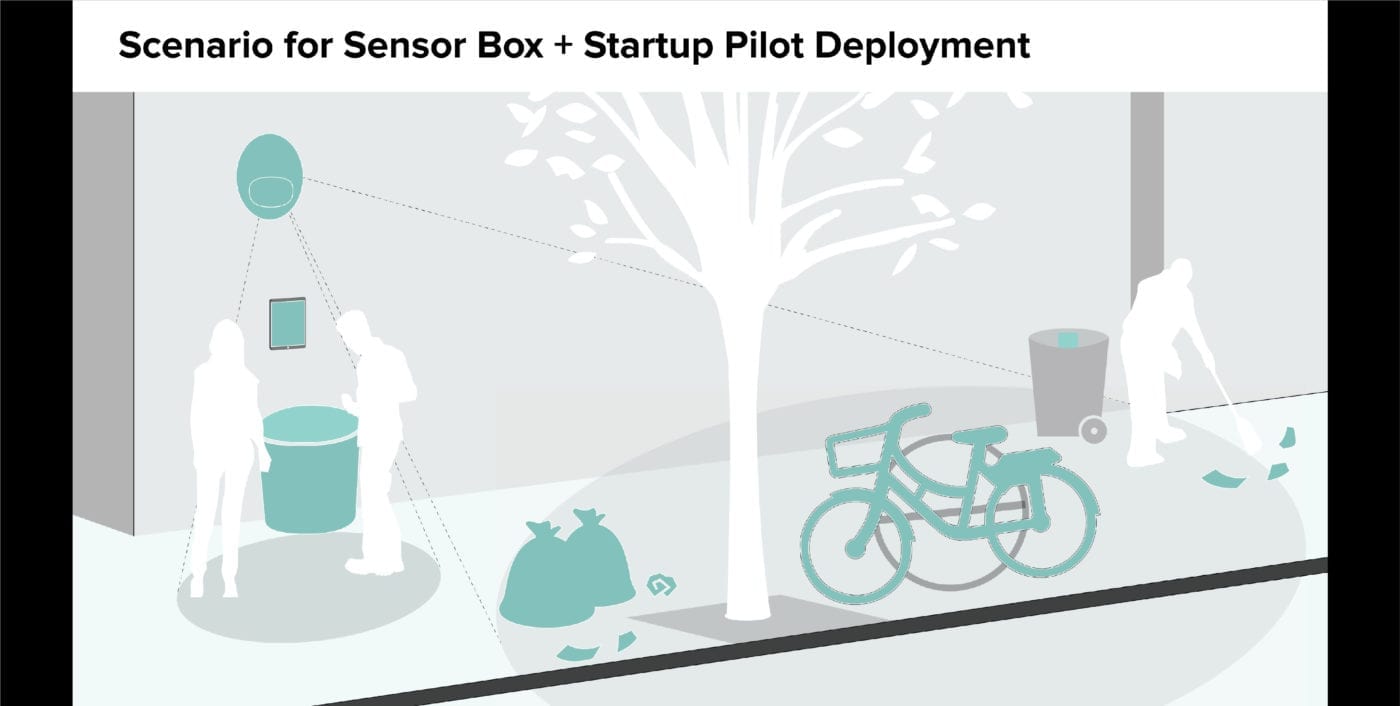 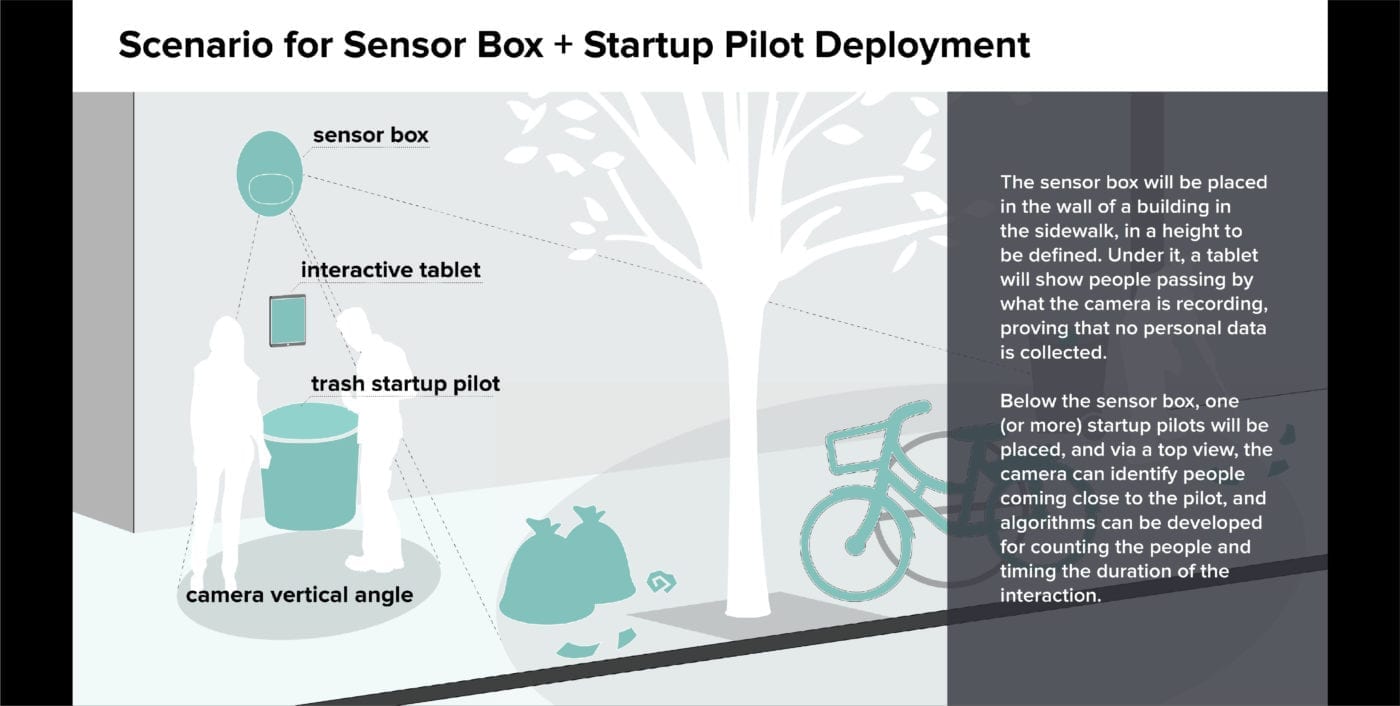 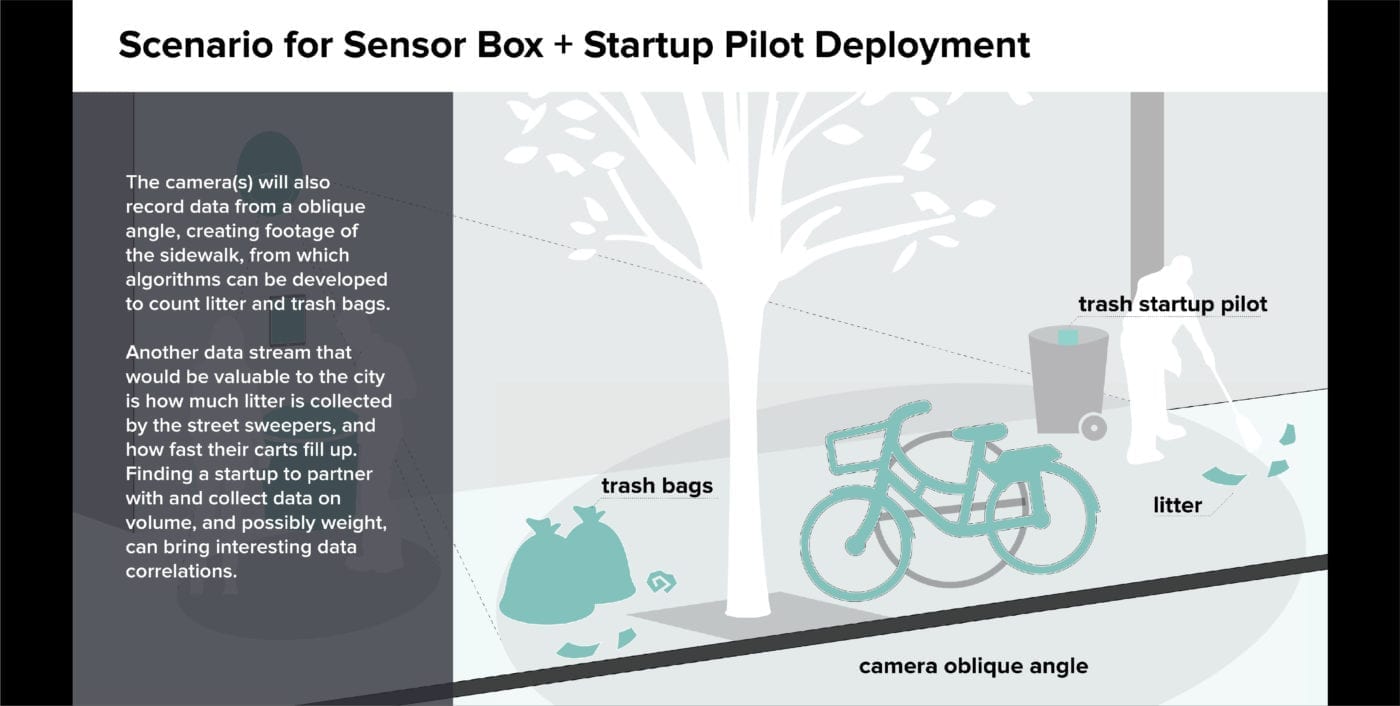 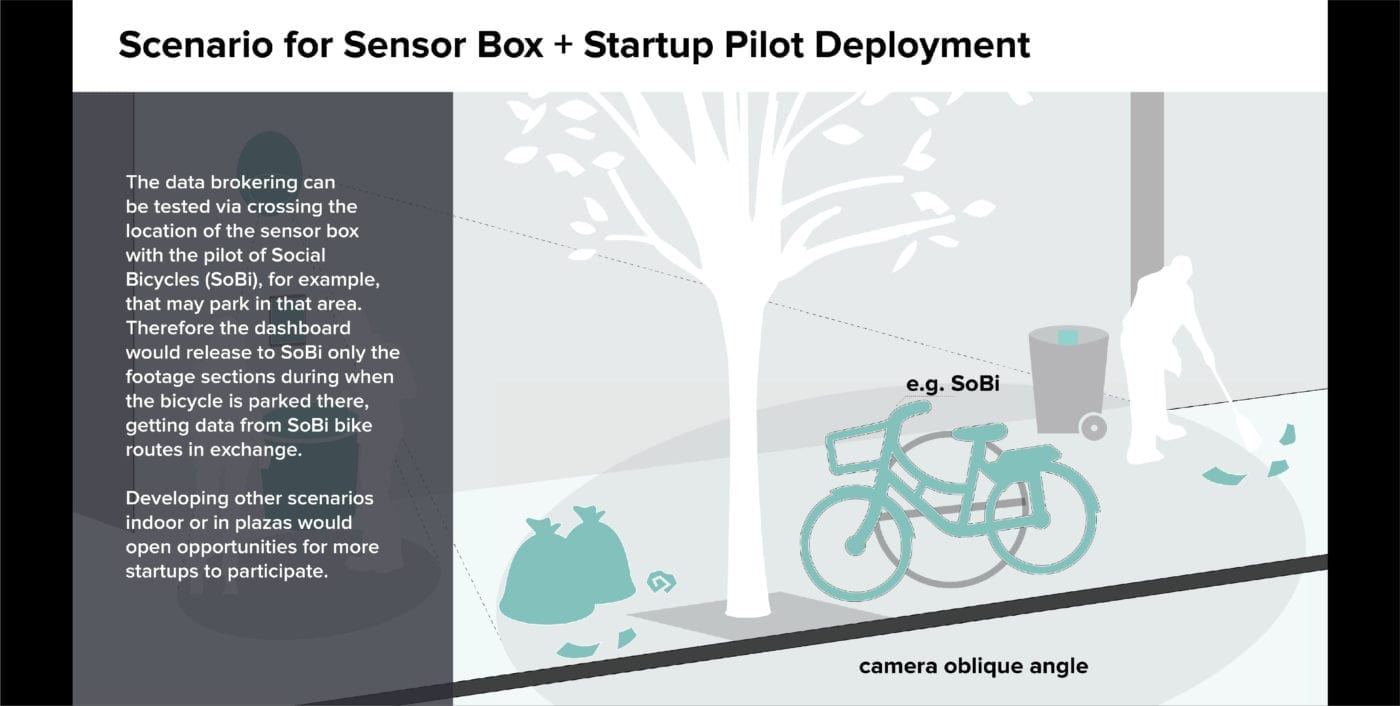 In the next months, further conversations with data experts and city stakeholders will help inform next steps. In the meantime, the sensor box is being prototyped by Superbright and will be deployed in Brooklyn Navy Yard along with startup pilots and a first dataset will be captured.

This data will serve as the basis for a competition in February 2018 to envision possibilities for value generation. Startups will deploy their pilots by summer and the installation will come to life at the end of 2018. Now it is up to New Lab to take this project forward and make bring it into reality. 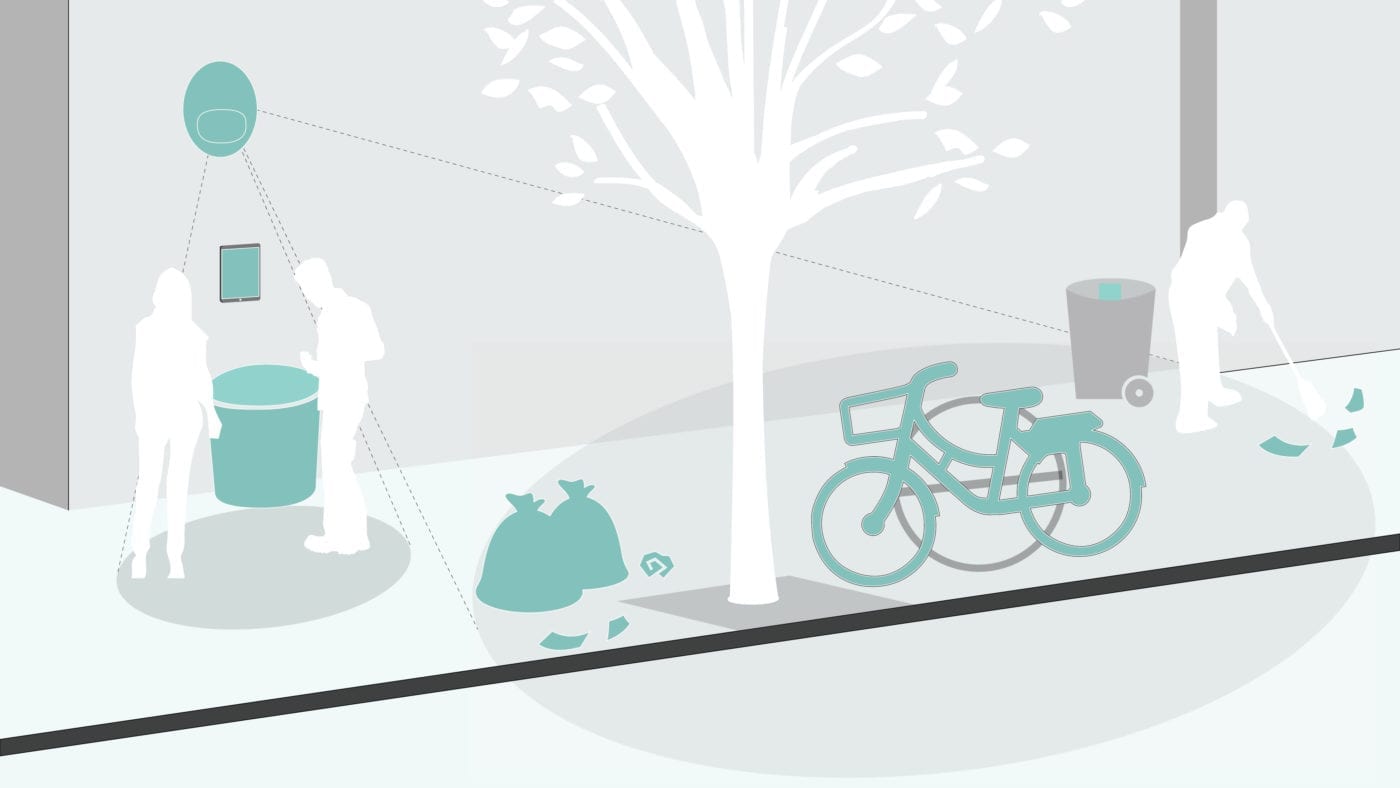 How might we frame a smart city challenge that bridges startups, citizens and the officials?

Project | The Future of Dealership

How might we imagine a holistic sales and after sales experience for customers and dealers?

Contact us
How can we create value together?
Request a proposal
Request a meeting or proposal about a challenge your organization is facing
Contact Form
Join our community
Apply to become a member and join our community of collaborators
Application Form
Join the team
See open roles and apply to join our team
See Roles
Subscribe to our newsletter!